Why Greece is in better shape than Germany

17 years ago I lived in Athens for 6 months as a strategy consultant. I loved the country, the city, the people. I was also amazed by the chaos, the apparent lack of ambition, of drive, of direction. Given this, I asked a friend how the Greeks were able to get so many projects funded by the EU, as was apparent from all the EU-flag signs on all kinds of public works. He told me that two-thirds of the entries for subsidy were not granted. He explained that most subsidy requests simply did not get finished. I interrogated him further and he offered a Greek saying:

I spent last week again in this fantastic city. With 1200 fellow entrepreneurs from one of the most inspiring organizations in the world, the Entrepreneurs’ Organization. You might expect that I would now conclude that things had gone from bad to worse. From a determined complacency to a country that is ridiculed as the living symbol of the crisis. But the opposite is true. I now believe Greece might be in a better position than Germany, the country that is a prime source of the ridicule. 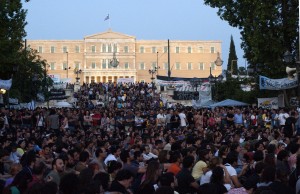 Don’t get me wrong. As we speak there is no doubt Greece is in a bad state. Many people have lost their jobs. Higher educated people are getting extra jobs to pay their bills. Their children are no longer sent to the best international schools for further education. Protests halt the country’s already weak economy. And so on. But there is something else going on at the same time.

Greece is for lovers. When I visited the touristic Plaka, the first shop I walked into  – Forget Me Not – had just been opened by enthusiast Filippos. It offers a collection of Greek Design. It was amazing. It was humorous, fresh, cool and above all – Greek. Meet the Greeks fold-it characters, an incredible, iconic skateboard from the inspiring Greece is for lovers brand. I bought the Kickstarter-funded ‘Cooking to share‘ cookbook by Alexandra Stratou that is simply the most stunning I have ever seen. Further along, simple tourist shops sell clothes that should have been made in China and sold for 7 euro. But they sell for 35 and are made in Greece.

New concepts. I visited 6 Dogs, just a bar. But more remarkable than anything I have seen in a long time. A friend told me that young people – even more hungry to connect socially and have a good time – have found new ways to do this on a very tight budget. Impromptu, pop-up parties are formed around kiosks, in squares. The kiosks replace traditional bars and are selling drinks at 1/3 of normal prices. Some people see this as a temporary low-end alternative borne out of necessity. I see a new bar concept in the making that adds new value.

Corporate Cool. Not all signs of buzzable new life and innovation in Greece are ‘underground’. Surprisingly, the Dutch embassy is supporting an incubator called Orange Grove together with a Dutch beer brand. I visited an event and was struck by the contagious energy, not least from Ambassador (and surfer) Jan Versteeg himself and all the people involved. Jan calls Athens the warmest cool place on earth in this fun video. 35 startups are getting support and are working out of the basement of the Dutch embassy. One of these startups, headed by Myrto Papadogeorgeou, created the civic engagement app ‘City of Errors‘. Spot problems in the city and help fix them. Not the first one, but done with a unique tone of voice. Startup Fleksi is possibly the best example of Greece’s path towards a buzzable future: an incredibly clever concept for a better keyboard on your smartphone. Who but the Greeks could reinvent the way the αλϕἁβητο is captured ? 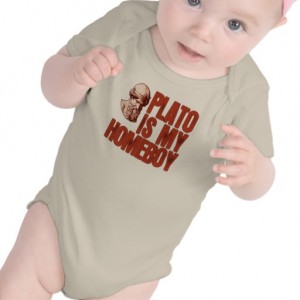 Although apparently all different, something connects these products and activities with the historic soul of the country and its future. A quirky, slightly black sense of humor laced with some fundamental philosophical wisdom and a strong urge to live life to the max. To enjoy it without having the urge to reduce all life’s risks as western countries are doing in ever more pathetic ways. These aspects could help Greece become buzzable again by aligning an inspiring ‘Why’ with a remarkable customer experience and ‘buzz’ that travels. And from what I can see, I think they are on the right track. 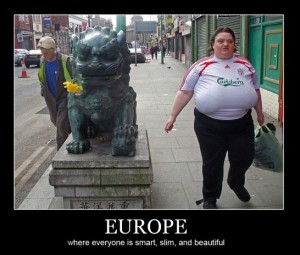 Greece is ahead of the curve. On a more global level, the EU has been similarly dismissed as irrelevant by the ‘real’ world powers China and the US. I have always resisted this notion. I simply believe the EU is in a different phase. Having achieved widespread wellfare and wellbeing first, Europe was also the first region to become lazy, defensive, complacent, fat, uninspired and unimaginative. As a result, it is now being forced to reinvent itself first. And after it has done this, it will again be the first continent to climb to the next peak. It is only poetic that the first European country to engage in this epic journey is the first one to conquer the original mountain.

I can relate to this from a personal perspective as I am sure many others can. A year ago I took time off to recover from an exhaustion that could have turned into a burnout. It was not an easy process but after time I started finding new energy, creativity and conviction every day. And more importantly: I was shedding waste, irrelevancies and getting closer to my inner purpose. I am now experiencing greater clarity and am having more fun in what I do than before. I am having more positive impact on my environment.

Creativity stems from necessity. So what is happening ? The depth of the crisis is finally awakening the Greeks from their post-civilization slumber. Yes, it starts from necessity and not from pro-active actions but this is typical. Most entrepreneurs start on a frustration, necessity, a tough challenge. It is not glamorous and success never comes overnight, as many publications tempt us to believe. Wonderboys AirBNB struggled for years and also started from necessity.

The Rebranding/Rebuilding of Greece. Greek’s greatest inspirational celebrity Peter Economides (who I was fortunate enough to chat with in his Voula house at the end of my trip) explained in his groundbreaking presentation (check it out below, English after the intro) the need for Greece to rebrand itself. When I discussed this with him, we both agreed that this is actually being done from the ground – through activities, experiences – and not by creating a shiny new advertising campaign with a funky logo. More rebuilding than rebranding. And yes, ultimately you should give the new dirction, the new ‘Why’ of Greece a name. That reflects what is unique about all the things coming out of this country. That aligns Plato with coffee mugs, bars, apps and skateboards. Coincidentally, Peter is an advisor to the Orange Grove incubator.

When you have nothing to lose, you do things right. Most Greeks would probably not agree with my observations. They are suffering. They feel they have been robbed of everything they had. They don’t see the way out and feel utterly helpless. But when you are freed of your golden handcuffs you are in a great position to do something remarkable. Because you are less cautious, defensive. Risks are taken out of the equation because you have nothing to lose. This is why innovation comes from startups not from corporates. This is why even Apple is now buying innovation.

Entrepreneurs will take the lead. But a small core group of people, most of them entrepreneurs, is starting with little but gearing up to build great things. And eventually they will inspire others to start believing again. Or at least to jump on their train. It might take 5 or 10 years for the popular opinion to notice this, but I believe I already have. As the Dutch embassy did, I believe more outsiders will start to see the opportunities (undoubtedly also powered by lower prices for pretty much anything) and invest in the new Greece. 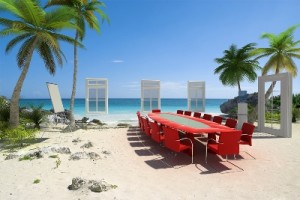 The Cyclades as Summer Office ! During my Athens days I had a chance to catch up with two great friends and entrepreneurs: Stephan Bayer, CEO of the Berlin-based online educator Sofatutor and Feliks Eyser, founder of Regiohelden. They are thinking of a ‘Summer-Office’ concept that aspires to bring hordes of startup employees over to the Greek Isles in the summer to make building new companies more fun during those months. I’m going ! Ruling beer brands could see the kiosk parties as a threat to margins. But I am sure they’ll eventually position a local brand to embrace the kiosk parties with mobile DJ booths, disruptive art platforms. And if they don’t, another startup will ; ) 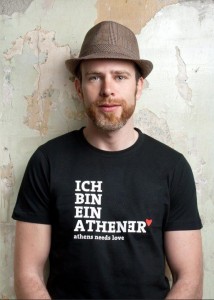 But better off than Germany ? Obviously, I wanted a buzzable title for this blog. It’s just the way my deformed mind works. But there might be a lot of truth to this statement. On the surface, Berlin is the opposite of Athens. It breathes success. All startups want to have an office in the Silicon Valley of Europe. All countries want the German/Berlin model.

Last Man Standing. But you could also see a rollercoaster of venture capital financing and ‘exit-horniness’ driving startups to deviate from real value creation towards inflated growth predictions. Of failing business models rapidly being pumped up to ensure an IPO or exit before it all tumbles down. Of startups for the sake of startups. A new TV show about Silicon Valley (below) paints an equally glorifying and disturbing picture. You might believe that Western economies are so hungry for success that we inflate entrepreneurial activity to mythical proportions to disguise the fact that there is little underlying intrinsic value, inspiration. Possibly Germany is even no longer aligned with its ‘Why’ (predictable quality) when the minister of education loses her PhD and organic eggs do not deserve that label.  It seems no coincidence that an article I read on the airplane back to Amsterdam predicts the demise of Berlin as a capital of Cool.

Greece’s big advantage. Maybe countries like Germany simply have not seen enough misery to fix the real bugs of the system. There is just enough wealth to keep on going without making real choices. There are still enough Chinese hungry for status to buy expensive cars. So we stumble on without capturing the opportunity to do something more remarkable. In Greece, there is no disguise possible. Greece is naked, vulnerable. And that is their greatest advantage.  I have not looked for data to support this view. The dots I am connecting do not create an obvious nor a straight line.  But ever since reading Malcolm Gladwell’s ‘Blink’ I try to follow my ‘intuition’ and it is telling me:

Greece is an ancient, cool startup on a path to become buzzable again.

The ‘Why’ Statement.  When I work with a brand, I sometimes create a ‘Why’ statement that reflects the buzzable purpose of the brand. That will act as a compass. One popped up when I was writing this blog. I look forward to your comments and alternative statements on Greece’s Why.